The Bharatiya Janata Party (transl. Indian People's Party; abbr. BJP) is one of two major political parties in India, along with Indian National Congress. It has been the ruling political party of the Republic of India since 2014.As of 2019, it is the country's largest political party in terms of representation in the national parliament and state assemblies and is the world's largest party in terms of primary membership. BJP is a right-wing party, and its policy has historically reflected Hindu nationalist positions. It has close ideological and organisational links to the much older Rashtriya Swayamsevak Sangh (RSS). 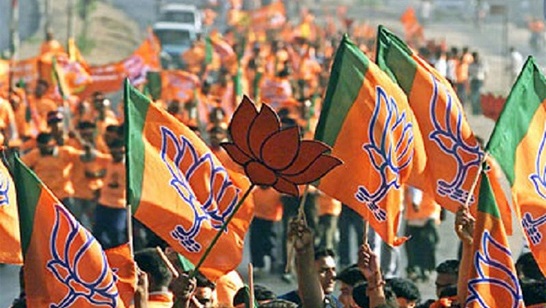 The BJP's origin lies in the Bharatiya Jana Sangh, formed in 1951 by Syama Prasad Mukherjee. After the State of Emergency in 1977, the Jana Sangh merged with several other parties to form the Janata Party; it defeated the incumbent Congress party in the 1977 general election. After three years in power, the Janata party dissolved in 1980 with the members of the erstwhile Jana Sangh reconvening to form the BJP. Although initially unsuccessful, winning only two seats in the 1984 general election, it grew in strength on the back of the Ram Janmabhoomi movement. Following victories in several state elections and better performances in national elections, the BJP became the largest party in the parliament in 1996; however, it lacked a majority in the lower house of Parliament, and its government lasted only 13 days.

After the 1998 general election, the BJP-led coalition known as the National Democratic Alliance (NDA) under Prime Minister Atal Bihari Vajpayee formed a government that lasted for a year. Following fresh elections, the NDA government, again headed by Vajpayee, lasted for a full term in office; this was the first non-Congress government to do so. In the 2004 general election, the NDA suffered an unexpected defeat, and for the next ten years the BJP was the principal opposition party. Long time Gujarat Chief Minister Narendra Modi led it to a landslide victory in the 2014 general election. Since that election, Modi has led the NDA government as Prime Minister and as of February 2019, the alliance governs 18 states.

The official ideology of the BJP is integral humanism, first formulated by Deendayal Upadhyaya in 1965. The party expresses a commitment to Hindutva, and its policy has historically reflected Hindu nationalist positions. The BJP advocates social conservatism and a foreign policy centred on nationalist principles. Its key issues have included the abrogation of the special status to Jammu and Kashmir, the building of a Ram Temple in Ayodhya and the implementation of a uniform civil code. However, the 1998–2004 NDA government did not pursue any of these controversial issues. It instead focused on a largely liberal economic policy prioritising globalisation and economic growth over social welfare.